You Are Here: Stanford Summer School 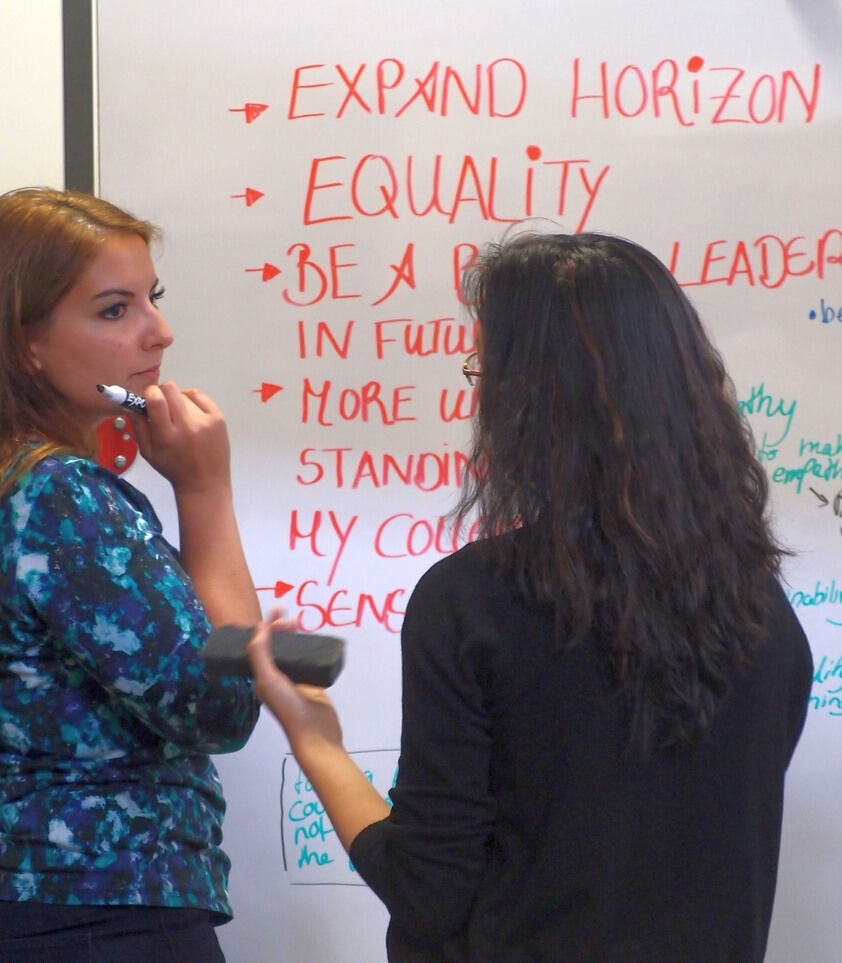 During a period of research at Stanford University in 2014, which was initiated by Professor Leicht-Scholten, the idea of a transatlantic summer school was developed. Inspired by the international perspective on gender and diversity in the context of engineering and the amalgamation of future social requirements with the resulting requirements for future engineers, a course should have been developed, in which students from different fields of study had the chance to exchange on an international platform about gender, diversity, and culture during the process of innovation development.

The course was jointly organized by Professor Leicht-Scholten, Chair of the professorship “Gender and Diversity in Engineering“ at the faculty of Civil Engineering, Professor Sherri Sheppard, professor at the Faculty of Engineering at Stanford University, and the Hasso Plattner Institute of Design at Stanford, the so-called D-School at Stanford University. A joint selection process took place prior the event, in which the cooperating institutions selected 15 students of both Stanford University and RWTH Aachen from a wide variety of applications. During the course the participants had the chance to obtain profound insights into the interaction of technology and society, and to deal with the social responsibilities of engineers.

15 students of RWTH from the fields of engineering sciences and social sciences took part at the event “Expanding Engineering Limits: Culture, Diversity, and Gender“. The course consisted of a one-week summer school at Stanford University and a 10-week follow-up course in Aachen and Stanford.

During the one-week summer school at Stanford University, the students had the opportunity to participate in seminars in the d-school and to learn the method of “Design Thinking“. In this approach interdisciplinary teams work in a common creative process to solve complex problems and to get user-oriented solutions. At the end of the summer school the students came together in transnational and interdisciplinary teams in which they developed a user-oriented approach to a self-imposed question in the subject area of engineering and society during the following class.

After the one-week summer school at Stanford University, a 10-week-long follow-up course took place at both universities. Teachers from Aachen and Stanford designed the events of the follow-up course jointly. Not only discussions about selected relevant literature were part of the course, but also every appointment has been enriched by guest speakers such as Professor Ernst Schmachtenberg from the RWTH Aachen, Professor Londa Schiebinger from the Stanford University, and Susan Kemnitzer from the National Science Foundation. The follow-up course could take place simultaneously at both locations using a video conference system. This enabled an interactive exchange between teachers, students, and guest speakers at both locations – both during the course and during the final presentation of the students’ works.

The concept of the course meets the highest didactic and content-based requirements. In this case it is composed of two elements. The students receive basic knowledge of gender and diversity during the one-week course that is held alternately at RWTH Aachen and Stanford University. As an approach to innovation generation in an application-oriented teaching format the method of “Design Thinking“ is conveyed, in parallel. During this “Pop-Up-Class“ the students develop applications, based on a qualitative problem analysis, that are processed later in the course - of interdisciplinary and intercultural teams. Guest lectures of national and international experts also provide an insight into research and industry.

Through the international cooperation, the students are prepared for the challenges of a globalized labour market and are able to work in a diverse team by using different media.